Blue, green, Colorful Planet. They define the Earth in one way or another, the only one really known to us among the planets, authors of almost all science fiction novels. Blue, because this is the color of the sky seen from the surface of the Earth and the same surface of the waters reflecting the clouds flowing in the blue sky. Green is synonymous with the Planet of Life, a planet covered with forests and grasses, here and there only cacti or low mosses and lichens. Plants, which consume carbon dioxide, and they produce pure oxygen necessary for the life of us people and our close and distant relatives: monkeys, dog and cat, but also flies and spiders, fish and snails, and even invisible bacteria, Without which our life would not be possible either.

Colorful, because each green plant has a different color of green, almost all are covered with flowers shimmering with a thousand colors and shades. Each water reservoir shines with a different shade of blue, sometimes it takes a sapphire color, sometimes greenish, emerald or even yellow. The water in the mountain stream has a different color, another in a rapidly flowing river, and still another in lakes and oceans. Almost everything is colorful, what surrounds us. Our clothes, furniture, plants, birds, Butterflies, and even fish, and among them also those living in the eternal darkness of the ocean depths. Contrary to all appearances, in the "darkness” there are hundreds of varieties of fish that shine with their own, colored lights. In the firefly fish family alone, we can distinguish approx 150 species, each of which has its own, a characteristic arrangement of colored light organs. Undoubtedly the King, the aristocrat of the underwater world is Bathysidus pentagrammus. 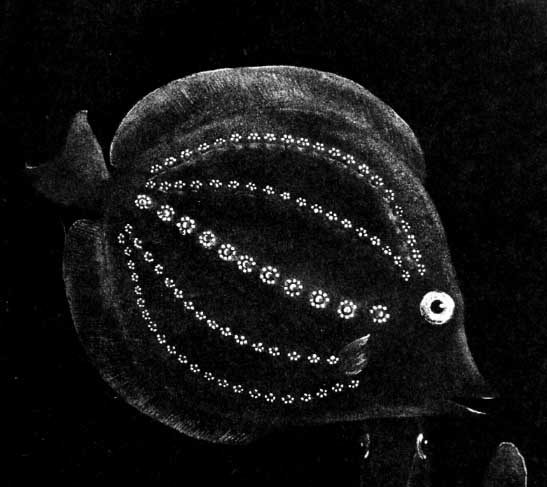 According to the second part of its name, along its sides there are five fabulously beautiful light stripes. Each of these stripes consists of a series of larger points shining with pale yellow light, and each of them is surrounded by a few smaller ones burning vivid purple.

The rocks and soil are also colorful, from which our planet is made. Each, who has ever been to the mountains, by the river or on the Baltic beach, more than once he picked it up from the ground and watched with interest the shimmering colorful pebble. A plain piece of granite or porphyry, sometimes a multicolored agglomeration. There, who were more fortunate, they found green veined malachite, sometimes multi-colored patterned agate. Still others are beautiful quartz crystals – colorless, transparent like the best glass or tinted purple, yellow, pink, and sometimes milky or deep black. Quartz, beryle, sapphires, rubiny, emeralds. Colored, sometimes colorful, shimmering with many shades of several colors, the most colorful opals among precious stones and ornamental stones, to, as the poets called them, flowers of the earth. As beautiful and as colorful as live flowers, and at the same time much more durable than the living. Unchanged in its shape and color for thousands of years. Those stone flowers, just like living, they sparkle with thousands of colors and shades. So characteristic colors, that the words describing the shade of color were derived from the names of gemstones. The sapphire color of the sky is derived from the sapphire. The same sky can be azure blue like lapis lazuli. The green of a meadow can be emerald green, and even the Emerald Lake near Szczecin. We are talking about ruby ​​red, malachite green, amber, golden yellow or turquoise blue with a touch of green.