High-quality steel has equal strength 1 000 MPa. Meanwhile, already in 1923 years were calculated, that the crystal strength of ordinary table salt should be 5000 MPa, so five times more. According to the same calculations, pure iron should have even greater strength, because until 13500 MPa, that is over 50 times more than the actual strength of technical iron. Interestingly, iron is not the strongest at all. Plain graphite, which we can easily break even when sharpening a pencil, it should be more durable than iron, almost three times more. Means, that on a rod made of graphite of the same thickness as the graphite in a pencil, we could suspend a loaded Old or four Polish Fiats 125 p.

Where did this data come from? On what basis were these calculations made? Before we answer that question, let's remember, ze metal, just like table salt, have a crystalline structure. The structure of the crystal lattice of metals varies, but what they all have in common is this, that their lattice is made of the atoms of an element, the formation of this lattice is due to the bond strengths between atoms. And here lies the answer to the question posed. It is on the basis of calculations of the forces of attraction between the atoms of the crystal lattice that the theoretical strength of the materials can be calculated.

Unfortunately, theoretical calculations only show us the direction of the search, and they do not give any practical results. To get the strength of the iron equal to the calculated, we would have to produce perfectly uniform single crystals. Crystals, in which there would be only iron atoms without foreign impurities. Moreover, all the atoms should be arranged very regularly, so that an atom placed in the corner of one elementary crystal is simultaneously an element of an adjacent elementary particle.

So we have two difficulties to overcome: the first - impurities in the crystals and the second – heterogeneity of their structure. Can we do that?? 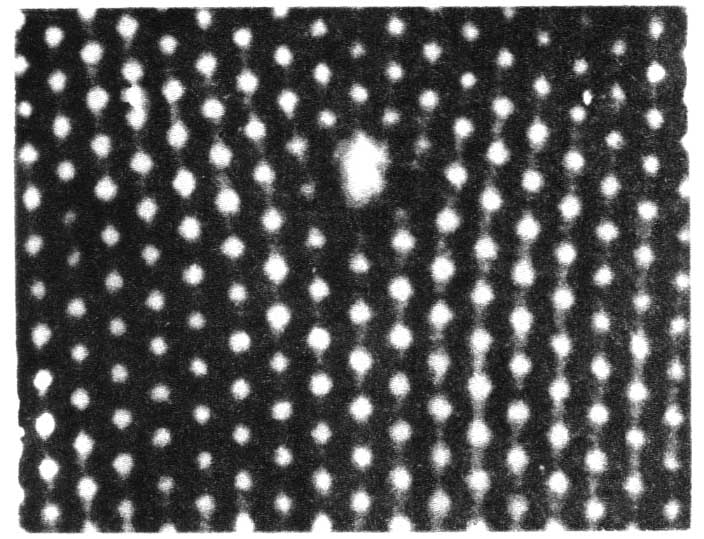 The photo above shows a photograph of the crystal taken with an electron microscope magnified two million times. The regularity of this crystal's structure was disturbed by only one foreign atom. As a result of such a defect, the strength of the material decreases and its other properties change. Construction heterogeneity, the lack of ordering of atoms in the crystal lattice can be eliminated, e.g.. by squeezing randomly scattered atoms into a regular grid. This is how, by squeezing ordinary graphite, we obtain a noble diamond. Unfortunately, the pressure required for this is tens, and even hundreds of thousands of atmospheres. To avoid this, more and more new ones are used, better methods of "breeding” perfectly homogeneous single crystals.

Many metals have already been obtained by the cultivation method, including iron. Unfortunately, they are thinner than a human hair and not longer than a few centimeters. Studies of these single crystals have shown the correctness of the theoretical calculations: The strength of the iron single crystals was equal 13360 MPa, so only Fr. 140 less MPa than the calculated strength. The calculated salt strength was also confirmed. Grown giant single crystal in length 60 cm and in diameter 1 cm, extremely pure - one foreign atom per billion atoms of chlorine and sodium - had a strength greater than that of premium steel.

So perfect, however, we cannot obtain such pure crystals with any of the methods described above. In the process of obtaining synthetic gemstones, we usually do not care about such perfection of crystals, as required by physicists or electronics.