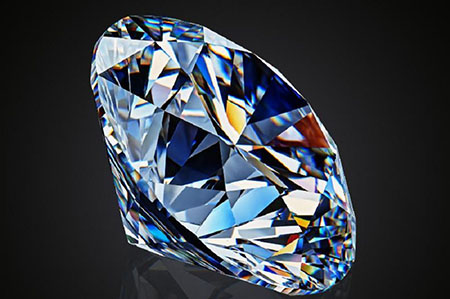 The physical properties of a diamond.

Cleavage. The diamond has a pronounced cleavage parallel to the octahedron faces. This is used for cutting (splitting) and grinding. When the blade applied to the diamond is lightly tapped in the direction of the cleavage plane, the diamond is split into two parts. This method was used in the past, when diamond saws were not yet known.

Too strong mechanical pressure can create a scratch towards the cleavage plane, or even cause the stone to break. If even a tiny slit forms, it is due to the penetration of a thin layer of air inside the stone, light reflection phenomena may appear, revealing the value of the diamond. The presence of such figs, caused by impacts during river transport, It is found more than once in diamonds extracted from gravel and sand. These scratches are often formed in the vicinity of foreign mineral inclusions in the diamond.

Hardness. Diamond is the hardest mineral. This property affects, inter alia,. for its high price. In the Mohs hardness scale, diamond ranks highest - 10. He is around 150 times harder than corundum, and approx 1000 times from quartz. This particular hardness makes, the fact that a diamond has been worn for many years does not change much; its edges and corners remain sharp, the strong shine obtained by polishing is not diminished either.

The hardness of the diamond on the planes of the cube and dodecahedron is lower than on the faces of the octahedron; the planes and natural edges are also harder than those created artificially by grinding. Experienced diamond cutters have found some differences in the hardness of diamonds, depending on their origin. Brazilian diamonds, in their opinion, as well as Australian and Borneo, they are harder than South African; diamonds from various African deposits also differ in hardness.

The exceptional hardness of a diamond is of great importance for its industrial use. It is also used in instruments for testing hardness. The only material, diamond powder is used to grind diamonds. However, due to the aforementioned differences in hardness, it is easy to damage the polished surfaces of diamonds by harder crumbs in the diamond powder. For this reason, grinders are particularly careful when grinding in a specific direction, especially when machining large ones, valuable stones.

Despite its hardness, diamond is a brittle mineral, not resistant to mechanical factors. It can be easily pulverized in a steel mortar. From the time of Pliny, which he informed in his work Historia naturalis, that a diamond cannot be smashed even with a hammer, it was believed in its resistance to mechanical action; it resulted in the destruction of more than one precious stone. For example, in 1476 r. after the Battle of Morat, crushed diamonds were found in Karol the Bold's tent, tested to be smashed to prove their truthfulness.

Density. The diamond has a density of 3.47-3.55, medium 3,52 g/cm3. Its value depends on the amount of infixes it contains, forming simultaneously with diamonds or older crystals. These are graphite infusions, magnetytu, rutile, manifested, pyrite and other minerals, often visible only at high magnification. Very small diamond crystals in the form of colorless and transparent octahedrons are often infused. : Cubes or tiny zircon crystals in the form of elongated bars, ending with the walls of the pyramids. The infusions have been found more than once during microscopic examination of diamonds.

In addition to the inclusions formed during the growth of the diamond crystal (syngenetic infixes), in many diamonds there are inclusions, which got inside the already formed crystals through small cracks and cracks (wrostki epigenetyczne). The minerals that make up such inclusions are mainly quartz and iron oxides. Inlays with a different coefficient of thermal expansion, e.g.. Zirconium or quartz infusions are unfavorable, as they can cause cracking of the stone when grinding it. Jewelers call black infixes "coals".

Relatively high diamond density (3,52) it has no significant significance when it is used for decorative or industrial-technical purposes. However, it plays a significant role in finding and extracting it. If, for example,. the density of the diamond was similar to that of quartz (2,65), it would not be easy to mine a diamond from a crumb secondary deposit. Due to their high density, diamonds sink to the bottom of rivers and accumulate in specific places in river sediments. As a result, it is also possible to obtain a greater concentration of diamonds when crushing rocks with strong jets of water.