However, when we want to get really beautiful crystals at home, and it is made of materials that are difficult to dissolve in water, we can use another way, although also included among the methods of crystallization from solutions. For this, however, we need to build a special "device", communicating vessel complex, and the crystallization process should be carried out in winter, using the heat of the radiator. 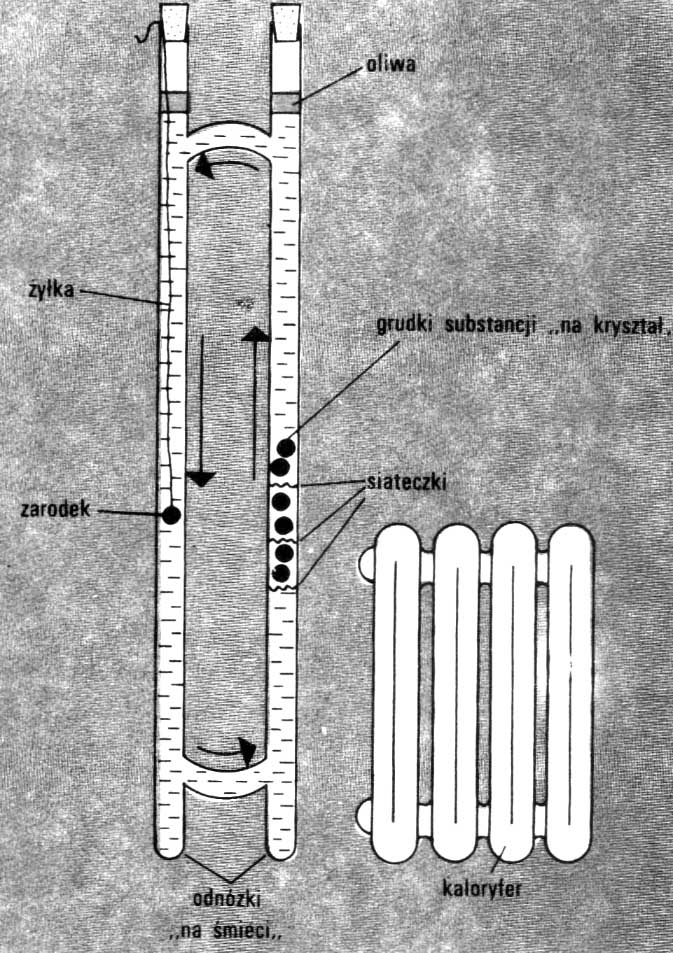 As shown in the figure, our crystallization "device" consists of two long tubes, the longer, the better, connected with each other by additional tubes at some distance from their ends. These tubes should be made of glass. As a last resort, they can be made of plastics – transparent polymethyl methacrylate (PMMA), that is, made of organic glass or plexiglass, or made of transparent polyethylene (ON). Glass or plastic tees and flexible pipes made of heat-resistant plastics can be used at horizontal connections. However, it is best to make them from glass by hot soldering. We hang the entire structure in this way, that one of the tubes is close, and the other as far as possible from the radiator. Of course, we can use a different radiator instead of a radiator, however, it requires constant monitoring over an often very long period, necessary for the growth of large single crystals.

The distance between the vertical tubes should be at least 30 cm. Vertical pipe diameters, or at least this tube, which will be away from the radiator, should be as large as possible. From this, among others. will depend, how big we can grow a crystal. In a vertical tube adjacent to the radiator, in the warmest place, so at the level of the top of the radiator, lay pieces of substance on plastic nets with large meshes, which crystals we want to get. As a last resort, we can put them in mesh plastic bags suspended on threads attached to the top edge of the tube.. The entire system of connected vessels is poured with distilled water to the level above the upper connection of the tubes. In the second tube, approximately the same height as the material in the tube, closer to the radiator, we hang a crystal seed on a silk thread or nylon thread. Pour a few drops of olive oil on the water surface in both vertical pipes, which will protect us from the evaporation of water and the ingress of dust, and the tubes are closed with plugs made of porous material. And it remains to wait again. The longer, the better.

This method of crystallization is referred to as hydrothermal crystallization. Hydro from the water, and thermal, because it uses elevated temperature, although in our case the temperature is not too high. The physical phenomenon is simple to explain. The water heats up near the radiator, which is accompanied by increased solubility of the crystallized substance. The increase in temperature is accompanied by an increase in the volume of the liquid (thermal expansion), the liquid becomes lighter and rises, and in her place, cooler water flows through the lower connections from the pipe farther away from the radiator. Water begins to circulate, and heated in one tube after passing through the upper connection to the other, it releases excess heat to the environment, cools down, as the temperature drops, the solubility decreases, and the excess substance separated from the solution is deposited on the growing crystal.

Beautiful and large salt crystals can be obtained with this method, and even crystals of substances sparingly soluble in water. In the same way, quartz crystals are formed in nature, emeralds, aquamarines, etc.. In the same way, flowing silica can be deposited in fossilized wood in the fossilization process. Underground water flows near hot rocks, warms up, it dissolves some of the minerals contained in these rocks, e.g.. in the form of very fine crystals, and after reaching colder places, these minerals recrystallize in the already known shapes of large crystals of precious stones. Synthetic quartz crystals and synthetic emeralds are also made in the same way. However, nature has a lot of time. Each crystal can grow hundreds, and even thousands of years. We people are always in a hurry, so instead of waiting calmly, we synthesize emerald crystals in devices similar to the one described, but at a higher temperature and pressure. 0 this one in another chapter, however. Instead, other information. Often very large single crystals are obtained by crystallization from aqueous solutions - even above 20 kg. Let this be an incentive for your own experiments and the construction of crystallization devices other than those described.