A stone that pretends to be a diamond topaz – aluminum fluorosilicate. The most famous and valued topazes have a characteristic "topaz"” yellow in various shades. However, there are also blue topazes, Violet, pink, red and colorless with the poetic name "a drop of water”. The conclusion is simple. A "drop of water" is polished properly and is sold as a diamond. But also in this case, discovering the forgery is relatively easy. Topaz is indeed harder than zircon, but like zircon, it can be scratched with corundum.

Topaz imitates diamonds, and itself is sometimes imitated by even cheaper lemons, the yellow variety of quartz we already know. According to its color, lemons, moreover, have other proper names: Fake yellow topaz”, Czech topaz” or "Spanish topaz."”. Not because of, that our southern neighbors or distant Spaniards invented the counterfeiting of topaz. In these countries, lemons are simply found more often than in other regions of the globe.

Except for the diamond, one of the most desirable, the most valued gemstone was and remains the ruby. This is why jewelers all over the world have introduced many commercial names for stones, that could pretend to be a ruby. Some of them are listed in the table.

Contemporary imitations of topazes are harder than them yellow sapphires, that is synthetic corundum colored yellow, stone produced in laboratories and industrial plants. To produce artificial topaz, no need for modern chemistry. Artificial, Alchemists and dishonest jewelers used to make almost real topazes. If we have a piece of amethyst, that is, a purple variety of quartz, which a lucky person or expert can also find in Poland, we can do it ourselves, at home. Heated slowly and carefully amethyst loses its color, turns yellow like topaz, green or orange. Also, smoky quartz turns yellow when heated. 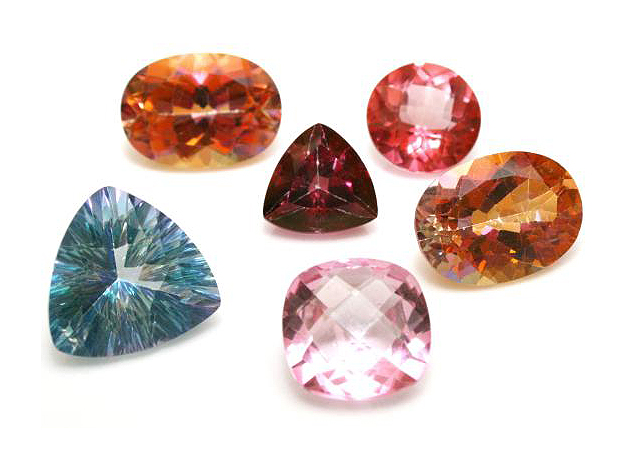 The most wanted, For many centuries, topaz with a pink or pink-yellow color unusual for this gemstone was a valued stone. Such stones are very rare, but yellow topazes mined in Brazil, slowly heated and cooled slowly, they change their color to the sought-pink color. Zirconium of any color can be made similar to a diamond by the same method. We no longer have to search for rare colorless zircons. The same zircon, under different heating conditions, turns blue, the most fashionable in recent years.