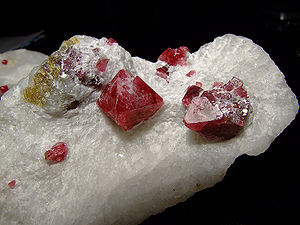 Spinel is aluminum and magnesium oxide with formula Al2MgO4 the MgO · Al2O3. In it, magnesium can be partially replaced by iron, zinc, manganese or cobalt, aluminum - by iron (trivalent) or chrome.

Character. Spinel almost always creates a clear one, well-formed crystals. Larger crystals are usually rounded. Spinel belongs to the regular formation, the most common forms are octahedrons, and also rhombic dodecahedrons. Twins are common, in which the twin plane is the octahedron plane.

Physical properties. The vague cleavage of the spinel is parallel to the octahedron faces. Spinel has a shell fracture, hardness 8, a density of 3.5-4.1 g / cm3; The varieties used in jewelery usually have a density of 3.5-3.7.

The color of spinel is red, Orange, yellow, green, blue, Violet, brown to black, glassy to matt gloss. Spinel is translucent to opaque. The refractive index used in jewelry fromspinel titers are 1.72-1.75. Dispersion approx 0,020. Optical isotropy related to a regular system, in which spinels crystallize and characteristic inclusions facilitate microscopic distinguishing of spinels from other stones.

In the trade, the most common are transparent, dark red varieties, usually called ruby ​​spinels. Red varieties are called balas rubies (balas ruby) or ruby ​​spinels; sometimes the name rubicell is used. Orange-red ones are called almandine spinels or almandines (this is the proper name for one of the grenades), blue ones - with safyrins or sapphire spinels, grass green - chlorospinelami, violet - eastern amethysts. There is a tendency, to remove confusing names and replace them with terms: red spinel, pink, blue etc..

When grinding spinels, grinding is used: diamond, deficit, mixed and cabochon. price for 1 a carat ranges from several to tens of dollars depending on the quality and size of the stone. Beautiful spinels the size of several hundred carats are known. A beautiful red stone in the crown of Tsarina Catherine II was a huge, over 400-carat spinel. The famous French traveler and expert on Tavernier precious stones was to buy in India in 1665 r. three large 200 carat spinels (Rubiny replied). Two giant spinels in the mineralogical collection of the British Museum come from Burma: one in the form of an octahedron weighs 355 kr, second, being a polished pebble (the capture of the Summer Palace of the Chinese Emperor during the war in 1860-1861) has a mass 520 kr.

Synthetic spinels sold under different names are now produced in a variety of colors.

Spinels are found in metamorphic rocks, especially contact transformed. Thanks to its high hardness and resistance, to chemical agents, spinels may be retained in secondary deposits, thanks to which they are often extracted from sand and gravel together with rubies, sapphires and other precious stones.