We remember, that all red-colored transparent stones were once called rubies. It was not known, that apart from rubies, red can also be much cheaper grenades – pirop or almandine, as red as a spinel ruby, red variety of tourmaline and many other minerals. The most beautiful rubies were sometimes more expensive than diamonds of equal size. Meanwhile, it has only recently turned out, that e.g.. the famous "Ruby of the Black Prince" is not aluminum oxide, like a ruby, but with double alumina and magnesium - much cheaper, although also a noble spinel. 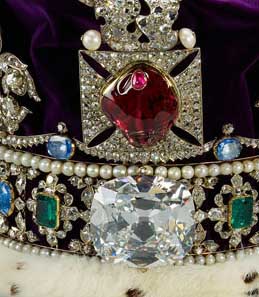 The first mention of this stone is given, that it belonged to the King of Granada, from where it passed into the hands of Castilian Peter the Cruel. In the record made during the inventory carried out in 1858 the year is written about this stone: Edward's Ruby, Prince of Wales, called the Black Prince, son of Edward III, podarowany (The Black Prince) by don Pedro (Piotr the Cruel), King of Castile, for helping in the victory at Najera (northern Spain) in year 1415. In the eastern custom it is drilled through, but the front part of the hole was plugged with a small ruby”. This spinel was also set into the first crown of Charles II as a ruby, and later into the British crown, which is used to this day during major ceremonies – Imperial State Crown.

Traditionally considered an emerald, stone, through which Nero saw burning Rome, it has been preserved to this day and is in the collections of the Vatican. A dozen or so years ago it was made available to a French mineralogist, which, on the basis of detailed mineralogical research, concluded, that it is not an emerald, but – oliwin. Magnesium and iron silicate - one of the most common rock-forming minerals, although exceptionally beautifully colored.

There were many more such mistakes resulting from ignorance. Later, once learned to distinguish between gems, they began to be consciously mistaken. There, who knew more, they cheated on these, who knew less, selling them real gems, but "pretending” other stones. We could call these stones almost real.

Zircon is a precious stone, which is a zirconium silicate, element with the chemical symbol Zr. Dependent on iron contamination, ask, niobium or other metals is brown in color, yellow, red or blue. Clear, colorless without impurities, most valued, has a diamond shine and is often polished to a brilliant cut. To attract buyers, it is often called Ceylon diamond, and sold as diamond by dishonest. Fortunately, a real diamond is much harder than zirconium. Zirconium can therefore be identified by a scratch test with an ordinary one, corundum sandpaper.