The causes of the color of gemstones

However, absorption of some spectral components is not the only explanation for the cause of body discoloration. In some cases, the color sensation results from the selective reflection of certain components of the light spectrum, in others, as a result of light scattering on fine grains of suspension evenly distributed in a colored gemstone, and in still other cases due to light interference. The mechanism of color formation by selective reflection does not need to be explained to anyone, who thinks in physical terms or simply thinks logically. It is enough to understand the difference between selective absorption and selective reflection. We will explain the essence of coloring by scattering elsewhere. The cause of the staining due to interference should be known to every eighth grade student, but the effect of the light interference was seen by everyone, even a preschooler. I will say more. He watches almost every day, and at least in days, when the sun's rays fall on the wet surface of motorways. 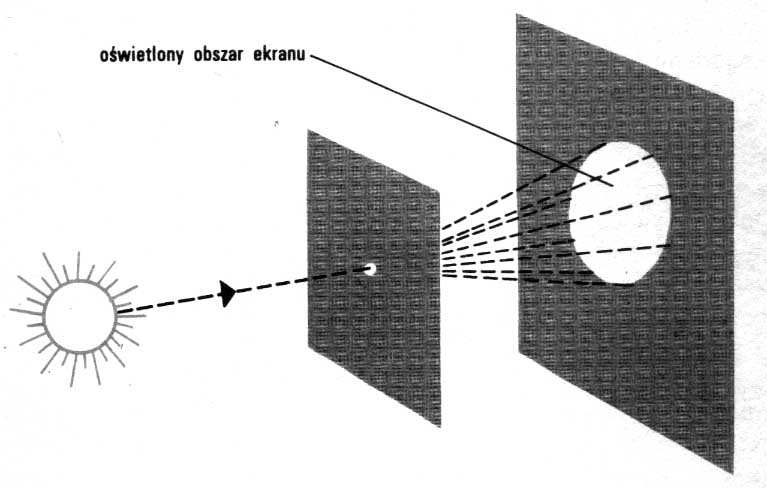 Variation of Grimaidi's experience – light rays bent at the edge of the opening.

The first, who, like us, watched this color phenomenon, but unlike most of us, he tried to answer the question of why, was an Italian mathematician, physicist and astronomer F.. M. Grimaldi. W 1665 a book was published entitled: "Mathematical and physical research on light and colors”, and in it a detailed description of the experiments carried out by Grimaldi. By passing sunlight through an opening in the shutter and positioning the rod in the path of light, he uncovered, that the shadow lines on the far wall opposite the shutter are not sharp, but blurry and, oddly enough, surrounded by colored fringes. The blurring of the edges resulted in a simple one, although the conclusion is very important for future knowledge - the light passing by the edge does not continue in a straight line, but bends, it runs at a different angle than in front of the folding edge. In this way, using such simple "research instruments”, like a shutter and a round stick, one of the fundamental has been discovered, pregnant with the effects of optical phenomena, the phenomenon of deflection or more of a learning – the phenomenon of light diffraction. 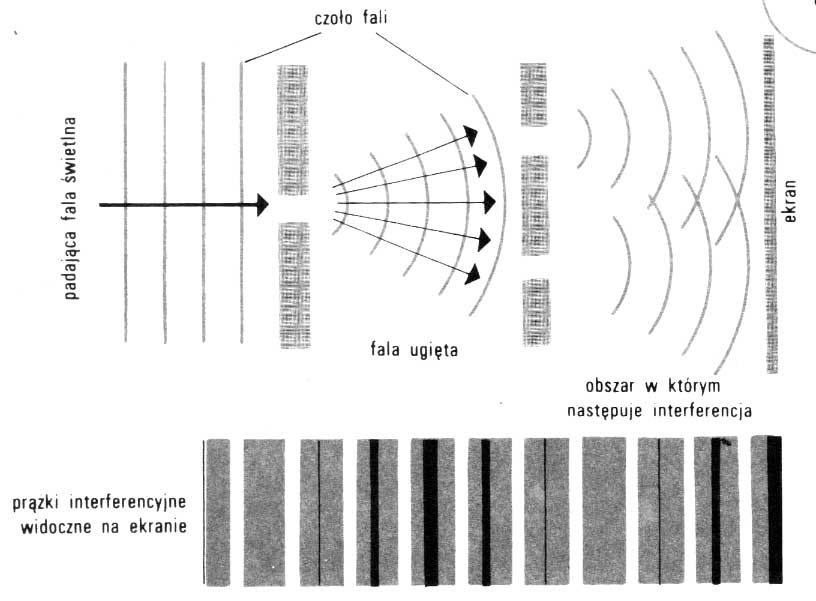 The interference phenomenon; amplification and extinction of waves causes the formation of interference fringes.

Unfortunately, despite detailed research into the cause of the formation of colored fringes around the shadows, despite the passage of narrow strands of light through tiny holes, and even as described in today's class VIII physics textbooks - by two fissures located close to each other, the cause of the colored fringes remained a mystery to Grimaldi. But remember - it was a year 1665. Only in 1800 a year richer by Fr. 150 years of experience of many researchers, the American physicist Leo Young came up with a hypothesis, that light is waves. Only on this basis could it be possible to explain a phenomenon difficult to understand for Grimaldi.

After passing through two closely spaced openings or narrow slits, waves of visible light are bent, and on the screen behind the holes they overlap; it is clearly visible in both pictures on the right. In the same place on the screen falls the bent wave after passing through the upper slit and the bent wave after passing through the lower slit. These waves can overlap like this, that there is an increase or decrease in the light. The screen shows alternately light and dark streaks, or when white light is bent - colored streaks. You can see the light spectrum split similar to the passage of white light through a prism.