Random discoveries also happen to us, contemporary. W 1895 year completely by accident, by studying completely different physical phenomena, German physicist Wilhelm Roentgen discovered previously unknown radiation he called X-rays (like the unknown in mathematics), today called X-rays. Physicists studied the nature of light at this time. It was already known, that light passing through a system of gaps called a diffraction grating gives an image of the spectrum. It was also known, that the spectrum is formed as a result of the deflection of light rays at the edges of the apertures and the interference of light rays. X-rays discovered by X-rays were attempted to perform the same tests. Unfortunately, no effect. No interference image was produced.

Independently of these studies, other physicists have studied the crystals, so mostly gemstones – the most beautiful, but also the most accessible crystal specimens. On the basis of these studies, it was already known, that crystals are a collection of atoms or other molecules arranged in an orderly manner in the form of a spatial grid. Both of these messages, not by accident, but as a result of the ability to think logically and associate partial knowledge, merged in 1912 year, the German theoretician physicist Max von Laue and proposed to perform an experiment consisting in x-raying the crystal with a beam of X-rays. The result of the experiment turned out to be in line with Laue's predictions. Regularly spaced points appeared on the photographic film behind the crystal - the image of deflection and interference of X-rays. The same was proved too, that X rays are wave-like, just like rays of visible light, only the wavelength is much shorter than that of light waves. Earlier failures resulted from a prosaic cause. The diffraction gratings used for light research were not able to interfere with such short rays. In crystals, the spaces between the atoms arranged in the crystal acted as a lattice, spaces thousands of times smaller than the distance between the lines of the diffraction grating. For the ability to think logically and for proving the wavy nature of X-rays in a year 1914 Max von Laue was awarded the Nobel Prize.

This is what distinguishes us and modern science from our ancestors and their methods of trial and error. Even a random discovery, randomly acquired knowledge triggers an avalanche of questions-how, co, why. One more question could be asked- for what? Why do we need to know about the nature of X rays? Is it not enough to be aware of their discovery and use e.g.. to x-ray a broken arm.

There are several answers to this question. First, if Roentgen had not posed similar questions in relation to other phenomena earlier, would not discover x rays. It would not be "happy” case. Po drugie, Thanks to Laue's discovery, we obtained a side effect important for the study of crystals using the X-ray method. Thanks to this method, you can get the so-called. Laue photos with recorded diffraction spots, and on this basis determine the type of crystal symmetry. After introducing some modifications of the method, it is also possible to study other parameters of the crystal. 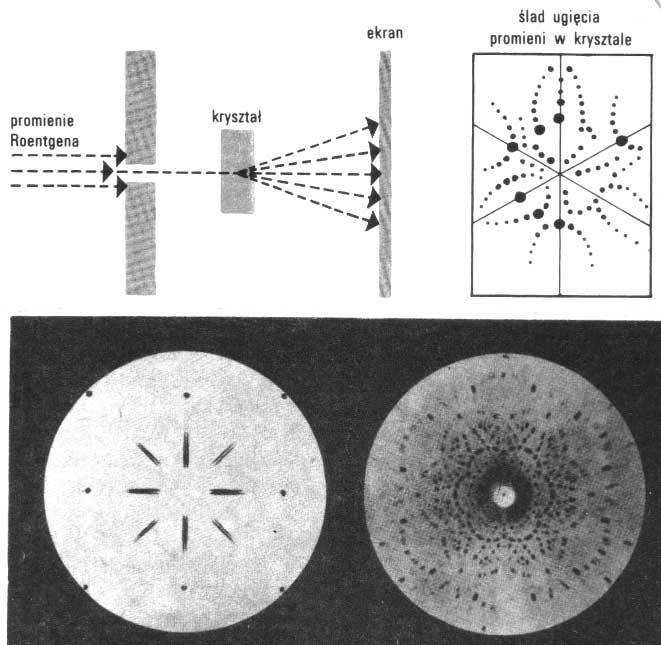 The scheme of Laue's experiment, interference spots recorded on photographic film and x-ray images of table salt and beryllium.

Finally, the third answer. By irradiating the crystals of various gemstones with X-rays "completely by accident", one of the previously unknown causes of the discoloration of some crystals was discovered. One of those mysterious, unexplained phenomena was the cause of the color of smoky quartz, gray to dark brown and black quartz – morionu. None of the known chromophores stains black. In both varieties of quartz, no staining impurities were found. Meanwhile, in the course of Laue's experiments, it turned out, that some gemstones crystals change color when irradiated with X-rays. Time has shown, that it is not a method suitable for counterfeiting gemstones. The color change is not permanent, and after some time the original color returns spontaneously. However, a new path remained, a new direction of research.