Occurrence and exploitation of diamonds.

Diamonds are found in primary and secondary deposits. Primary deposits are sparse and their exploitation, sometimes from considerable depths, it is difficult and expensive.

There are two types of primary deposits, whose names are derived from rocks containing diamonds. The first of them - the kimberlite type - is found in southern Africa and Yakutia (ZSRR), the second - the peridotite type - occurs in the Sayan Mountains, in British Columbia and Canada. 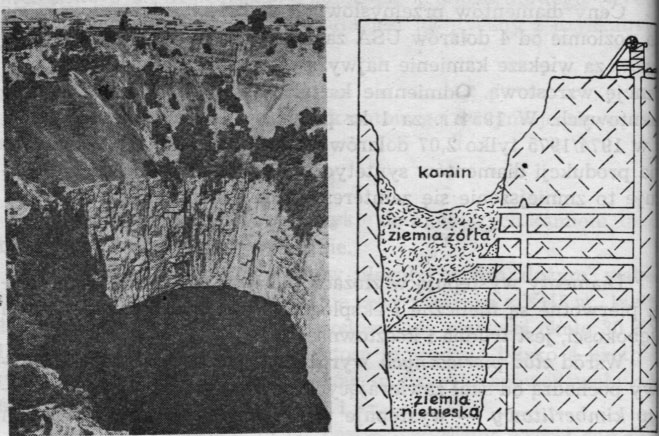 Drawing. Exploited kimberlite chimney at Kimberley, called the Big Hole (Big Hole), with a depth of over 400 m, recognized as one of the richest diamond mines in South Africa.

Previously known and much more common are secondary crumb deposits. These deposits can be of both river origin, and sea. Alluvial crumb deposits are of the greatest economic importance, found in the beds of old or modern rivers. Such deposits are found in India, Brazil, South Africa, Zaire, on the Gold Coast and Borneo. Crumb deposits of marine origin are found in Namibia. Diamonds from these deposits usually have rounded edges due to long-term transport by sea waves from place to place.

For a long time, it was impossible to explain the origin of diamonds. Both Indian diamonds, how brazilian and australian were found in sand or gravel and could only be deduced, that this is not their original place of origin. In South Africa, too, secondary crumb deposits were first discovered in river sediments, only later in the desert highlands of Karoo, among sandstones and shales, approx 200 giant funnel-shaped chimneys, similar to volcanic craters (pipes). It is generally assumed, that South Africa's diamond bearing chimneys were created by volcanic processes, which covered all of South Africa during the Cretaceous period. These funnels were melted from the depths of the earth, saturated with gases and carbon magma. Under the influence of the enormous pressure contained in the magma, the carbon could crystallize into diamonds. The funnels are filled with alkaline igneous rock, called kimberlite (from the village of Kimberley). It is a greenish blue rock, mainly composed of olivine and dark mica, chrome garnet and ilmenite. It is called the heavenly earth from its color (blue ground). Kimberlite changes its color to yellow as it weathers on the surface of the earth; it is then called yellow earth (yellow ground).

The diamonds found in kimberlites vary in size: from crystals weighing a few, very rarely a dozen or several dozen carats to invisible to the naked eye, individuals scattered in the rock. Diamonds in the rock can be seen relatively rarely at once. Because the kimberlite rock in the deposit is compact and firm, it takes a lot of energy to crush it. Therefore, kimberlites exploited in underground workings are usually brought to the surface and exposed for a long time, sometimes up to a year, to weather conditions. Under their influence, the blue earth becomes weathered, turning into loose yellow earth, from which the extraction of diamonds is much easier.

More recent detailed geological surveys have shown, that kimberlite chimneys are filled with tuff breccia, consisting of fragments of various rocks and containing minerals of various origins. Next to the crumbs of sedimentary rocks, like slate, sandstones and quartzites, various igneous rocks are present, mainly kimberlite, which is the parent rock of diamonds. As a result of subsequent processes, it was partially transformed into serpentine rock. Few diamond crystals are also present in tuff breccia, they got into during a volcanic eruption. From the nature of the minerals present, it can be inferred, that the diamond had crystallized at great depths (most likely around 80 km) from alkaline magma, low in silica, at a temperature of 1100-1300 ° C, under high pressure.

There are three views on the origin of primary diamond deposits. According to the first - diamonds crystallized out of magma on the spot, tan. tam, where they are now; according to the second - diamonds were the primary component of the deeper eclogite rocks, which were melted by kimberlite rising from the bottom and thus the diamonds deep in the ground came closer to the surface. According to the third view, which is gaining more and more followers lately, diamonds are a product of magma crystallization, which brought them from the depths to the surface of the earth.

The rarity of diamonds in primary deposits is explained by this, that this mineral can only be formed from magma under conditions of very high temperature and very high pressure, tens of thousands of atmospheres. Such high pressure only exists at a depth of approx 100 km, and from such depths, magma rarely comes to the surface.