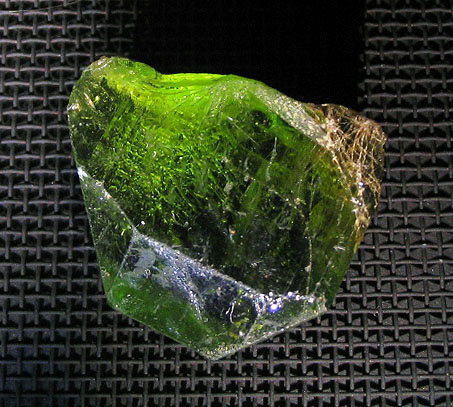 The chemical composition of individual minerals can be determined by a chemical formula. However, there are also such minerals, whose chemical composition varies within certain limits. An example would be the mineral olivine, whose chemical composition can be represented as a mixture of two components: magnesium silicate, Mg2SiO4 (forsterytu) and iron silicate Fe2SiO4 (fajalitu). Both of these chemicals have the same structures, and the unit cells of their lattices have very similar dimensions. It causes, that the crystal form of these substances is identical. The phenomenon there is, that various chemicals (elements or chemical compounds) they have the same crystal structures (with the same or similar unit cell dimensions) and the identical or very similar form of crystals is called isomorphism (one-form). The result of isomorphism is that mixed crystals can form, also called solid solutions. They arise then, when two elements or chemical compounds crystallize in a common environment and do not form separate minerals, but they are released in a homogeneous form with an intermediate chemical composition. In the case of olivines, magnesium ionic rays (Mg2+ — 0,066 nm) and iron (Fe2+ — 0,074 nm) not much different, which allows the formation of their Mg2SiO4 and Fe2SiO4 mixed crystals of formula (Mg,Fe)2SiO4. In the formulas of mixed crystals, the diadoch-like components are given in parentheses, separating them with commas, in order of their decreasing quantitative role.

A number of olivines have been conventionally divided into individual parts, which have been given separate mineralogical names:

The ions of different elements can replace each other even then, when they have different valences, if their ionic radii are the same or slightly different. An example would be a number of plagioclases, wherein the outer members are NaAlSi sodium aluminosilicate3O8 (bleaching) and calcium aluminosilicate CaAl2And2O8 (anortyt). Sodium ions can be exchanged in Diadochowo (On+ — 0,097 nm) and calcium (That2+ — 0,099 nm) and silicon ions (And4+ — 0,040 nm) and clay (Al3+ — 0,049 nm). The individual members of the plagioclase series were given names:

A number of plagioclases constitute, as does a series of olivines, przykład continuous row of mixed crystals.

A lower degree of crystallochemical relatedness is expressed in this, that the two elements, whose sizes of ionic rays are not very close, they can substitute each other in crystal lattices not continuously, but with some limitations. Such discontinuous mixed crystal rows include the garnet row, whose chemical composition is given by the formula: A32+ B23+[SiO4]3 or A32+ B23+And3O12 gdzie A = Mg2+, That2+, Mn2+, Fe2+, B = Al3+, Fe3+, Cr3+. The most important grenades are:

Calcium grenades, i.e.. grossular Ca3Al2And3O12, andradyt Ca3Fe2And3O12 i uwarowit Ca3Cr2And3O12, they give mixed crystals in all ratios. Ferrous Grenade - Almandine Fe3Al2And3O12 — daje ciągły szereg kryształów mieszanych zarówno z granatem magnezowym — piropem Mg3Al2And3O12, and the manganese grenade - spessartine Mn3Al2And3O12. However, a pirop of spessartine does not give a continuous series, but only a series with a large gap, and all calcium grenades with iron-magnesium-manganese grenades form mixed crystals also only to a limited extent. This is due to the similar size of the ion radii of bivalent iron (Fe2+ — 0,078 nm) and magnesium (Mg2+ — 0,060 nm). Aluminum ions have similar sizes (Al3+ — 0,049 nm), chromium (Cr3+ — 0,069 nm) and trivalent iron (Fe3+ — 0,064 nm). Jon manganawy (Mn2+ — 0,080 nm) it has an ion radius similar to that of the ferrous ion (Fe2+ — 0,074 nm), a too different from the ionic radius of magnesium (Mg2+ — 0,066 nm), so that they can freely replace each other. Calcium ion (That2+ — 0,099 nm) has an ion radius much larger than other divalent ions found in pomegranates and therefore has a very limited possibility of isomorphic mixing with them.

There are such ones among minerals, which, with the same chemical composition, have different structures, crystal forms and properties. Examples may be: element carbon C native to two minerals: diamond belonging to a regular system and graphite crystallizing in a hexagonal system. Iron sulfide FeS occurs as a pyrite mineral (regular) d markasyt (rombowy), calcium carbonate CaC03 jako kalcyt (trigonal) i aragonit (rombowy). Titanium Dioxide Ti02 it is three-form, because it appears as a tetra-gonal rutile, tetragonal, but of a different form and structure anataz i rombowy brookit (used). In the form of three minerals: sillimanitu, andaluzytu i dystenu, that is, cyanite, there is also a chemical compound with an oxide formula Al2O3 • SiO2. The phenomenon of the occurrence of one chemical substance in two or three forms is called - in contrast to isomorphism - polymorphism (multiformity). The presence of two forms is known as dimorphism.

Individual polymorphs are formed under certain physico-chemical conditions. Calcite is formed from aqueous solutions below 29 ° C, above this temperature, aragonite is formed. Calcite can also form at high temperatures with the right pressure, e.g.. as the main ingredient of metamorphic marbles. Marcasite is a less stable type of iron sulphide compared to pyrite, which at 530 ° C turns into pyrite. Similarly, under high pressure, andalusite and disten transform into silimanite.

From the presence of some polymorphs in the rock, conclusions about the conditions can sometimes be drawn, in which it was created. This is especially true for temperatures, which resulted in naming these polymorphs as geological thermometers.