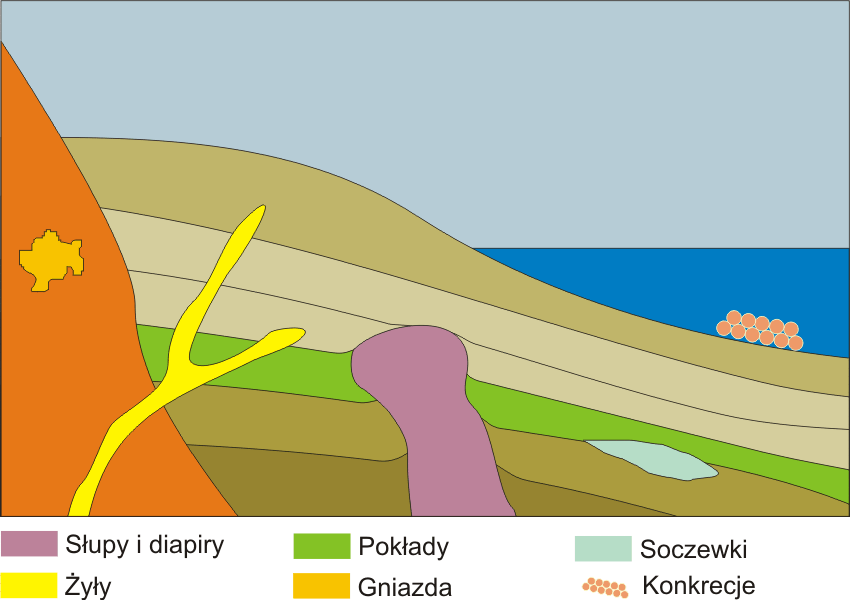 A mineral deposit is such a natural concentration of a mineral resource or a set of mineral resources, the exploitation of which is profitable. A mineral is a mineral or group of minerals found in nature, which, directly or after processing, may be useful for economic purposes. Only some minerals can be used directly, e.g.. elements occurring in the native form, like gold, silver, copper, sulfur, diamonds and other precious stones. Mostly, however, mineral resources, which are overwhelmingly chemical compounds, must undergo various technological processes in order to obtain a useful component from them, e.g.. metals from naturally occurring sulphides or coke from coal.

Due to their usefulness and application, mineral raw materials are divided into groups:

I) energy resources, that is fuel,

V) ornamental raw materials, which include gemstones (diamonds, emeralds and other varieties of beryl, sapphires, rubies and other types of corundum, topazy i in.), semi-precious (grenades, different types of silica, etc.) and decorative stones (serpentynity, labradoryty i in.).

The deposit is defined as the name of the element obtained from it, e.g.. zinc deposits, lead, sulfur, etc., or the name of the most important mineral, e.g.. deposits of magnetite, hematytu, barite, rock salt, etc.. If there is more than one in the deposit, but more minerals are indicated in the name, e.g.. lead and zinc deposit, a deposit of potassium salts, etc.. It is not the most important thing, whether the given mineral is the main or only minor component of the deposit. A silver deposit may sometimes contain only a fraction of a percent, likewise a deposit of gold, the operation of which is profitable even with the content 0,001% this metal. This also applies to platinum and diamond deposits, the percentage of which in the bed is usually even lower.

Sometimes the accumulation of mineral resources is only in some parts of the deposit, despite the same or very similar mineral composition. It may depend, for example, on. on hydrogeological conditions, cracks and other tectonic phenomena, which so may hinder the operation, that it becomes unprofitable.

Endogenous deposits are distinguished in the most general genetic distribution of deposits, divided, in turn, into magmogenic and metamorphic, and exogenous deposits (hypergenic). The magmogenic deposits include igneous and pegmatite deposits formed as a result of post-igneous processes, pneumatolityczne i hydrotermalne, in which there are many different gemstones.

In the pegmatite deposits there are, among others. such elements, how: beryl, lit, niob i tantalum, rubid i cez, zirconium, bor i in. Pneumatolytic deposits are accompanied by minerals containing fluorine, like for example. tourmaline, topaz, fluoryt, and they occur in hydrothermal deposits: quartz, kalcyt, barite and fluorite.

In places, residual deposits may form in which the rocks are decomposed, among which there are deposits of mechanical origin (eluvial) and chemical origin, i.e. airing. Mineral resources accumulated in eluvial deposits are the remains of the original rock material washed away by water or blown away by the wind. In this way, deposits of heavy minerals were created, which were not carried away by water or wind. Some deposits of precious stones may have developed in a similar way, resistant to weathering and having a higher density than common rock constituents, in which they originally appeared.

Like the residual deposits, also sedimentary deposits (sedimentary) arise as a result of exogenous processes, however, the secondary accumulation of mineral resources does not occur at the site of rock decomposition, but in some, sometimes even a considerable distance. The most important factors, on which the formation of this type of deposits depends, there are transport and sedimentation. Flowing waters play a major role in the transport of rock and mineral material, i.e.. streams and rivers, from time to time this material may be transferred elsewhere by waves and sea currents.

During the transport of the material formed as a result of weathering, its selection usually takes place, consisting in the separation of larger rock and mineral crumbs, unchanged thanks to their resistance to chemical and mechanical weathering., e.g.. quartz, of smaller material, being a product of airing, which is carried on. High-density mineral crumbs are more difficult to float and can form local accumulations. Such heavy and chemical-resistant minerals include:. gold, platinum, kasyteryt, ilmenit, monacyt oraz cyrkon i inne kamienie szlachetne. Osady rzeczne zawierające minerały w opłacalnej do eksploatacji ilości określa się jako złoża aluwialne, a osady morskie — jako plażowe.