The method of extracting crystals from a liquid, developed by Czochralski and modified by many other physicists, belongs to the group of crystallization methods by cooling a melt with the same composition as the grown crystal..

A method similar to that of Czochralski is the Kyropoluos method developed in 1925 year. It is also a method of extracting crystals, but not using the adhesive and natural cooling forces of the liquid portion raised above the liquid surface, but leading to the freezing of a portion of the liquid in the crucible. The principle of the method can be best understood by analyzing the drawing. The crystal seed is mounted in a special one, intensely cooled handle. Cooling is achieved by air flow, water or other liquid - e.g.. molten metal through the handle. 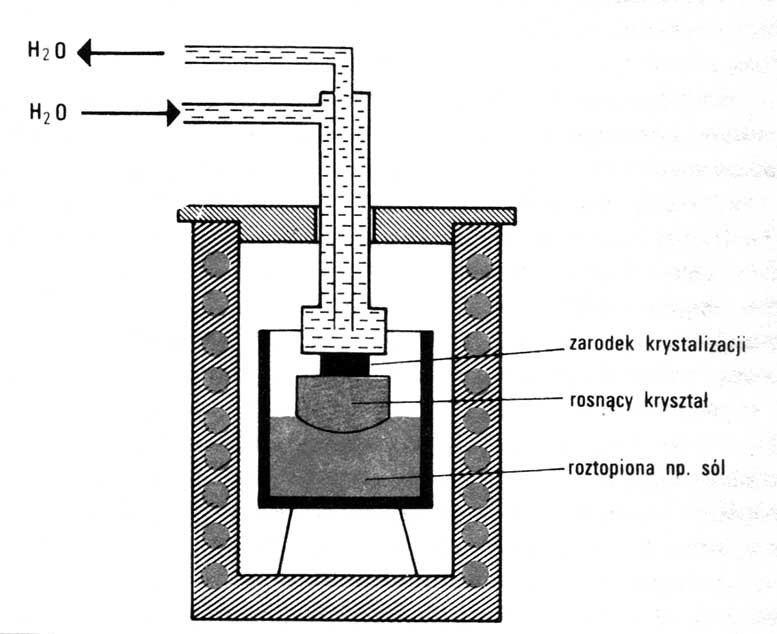 Lower the handle with the embryo down, until it comes into contact with the liquid. Because the temperature of the embryo is lower than the temperature of the liquid, it coagulates and freezes on the surface of the embryo. And again – similar to the Czochralski method, lift the handle with the growing embryo up. The lifting speed, however, is not dependent on the difference between the adhesive force and the gravity of the liquid, only on the rate of rise, "Defrosting” the cultured crystal. However, this method is not suitable for growing crystals with high melting points, and therefore for the cultivation of gemstones. However, it has found widespread use in the cultivation of salt single crystals with a low melting point, including table salt.