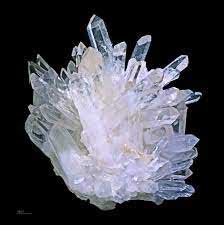 The most common mineral – the chemical compound is quartz - a compound of silicon with oxygen in the most common form known as ordinary sand with a very simple chemical formula – SiO2. It is obvious, if we include, that oxygen and silicon are the two main components of the earth's crust. Oxygen is almost half (49,4%), and silicon, the second after oxygen, more than a quarter (25,45%) the mass of the earth's crust. Silicon is similar to carbon in its properties. Like carbon in the living world, it is the basic building block of all living organisms, so silicon plays an essential role in the inanimate world. Silica in various forms and in various silicate and aluminosilicate minerals make up the majority of rocks, it is like the backbone of the earth's crust. But not only. Silica is also one of the important building blocks in the living world - in plants and animals.

The horsetail herb contains approx 5 do 8% silicon in the form of silica, including approx 1% water-soluble silica – easily assimilated by the human body. Lungwort contains even more soluble silica – 2,5%. And precisely because of the silica content, these herbs are used in the treatment of osteoarticular tuberculosis.

The stiffness and hardness of bamboo is largely due to the silica that is part of its fibrous elements. But bamboo takes up more silica from the ground than is needed to saturate the fibers, and the excess is deposited near the elbow in the form of one of the opal types, one of the precious stones from the quartz group. Opal ten, known as tabashir, it was used in antiquity in China and India as a decorative stone and as a sugar substitute. Apart from silica, it contains many organic ingredients, including sweet ingredients. Tabashir can be colored by saturating it with plant and animal dyes, and in this form it can even imitate noble opals and onyx. In line with the traditional, folk eastern medicine can be a medicine to treat asthma and tuberculosis. Official medicine has not commented on this, but judging by the effects of using horsetail extracts, it is possible, that also in this case the knowledge of our ancestors is consistent with reality.

Among animals, silicon is especially often used to build their skeletons, sometimes external skeletons – shells or protective armor, there are aquatic animals. Among other things, the sponges we already know, but also diatoms and many others. As has only been shown, silicon is also an essential component of the skeleton, but also soft tissues in mammals.

Except for quartz, silicates (e.g.. emerald) and aluminosilicates (we already know the alb), among the minerals-chemical compounds that make up the earth's crust, chemists stand out: nitrates, borany, chlorides, fluorides, phosphates, sulfides, oxides, carbonates and many more.

Some of these minerals, characterized by a beautiful color, often transparent, usually very hard, scratch-resistant even with everyday ring wear, acid-resistant, considered noble. But let's remember, that gold would not be such a highly valued metal, if it weren't so rare. Gemstones are also rare. Hence their high price and use, just like gold, in jewelery for making ornaments and haberdashery.