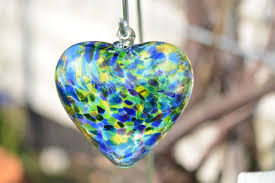 We know for sure, that they were produced in ancient Egypt and Mesopotamia, and this already in the third millennium BC. Initially as ornaments with a magical meaning, and later as beads for necklaces, earrings and bracelets. About 1400 year BCE. In ancient Greece, a new technique of decorating goldsmiths appears in Mycenae - gold inlaid with precious stones, mainly lapis lazuli brought to Mycenae from distant Afghanistan. W 100 years later, when the new fashion has caught on, when markets expanded, there was a shortage of natural stone, instead of lapis lazuli, its blue glass imitation was used. In the 1st century BC. the famous encyclopedist Pliny the Elder 37 the book of his multi-volume work "Natural History” writes, among others. on the production of glass imitations. He writes, that this skill was brought to "art”, but in the next sentence he adds: Surprisingly silimitudinen access to the glass, But only a portent, and its price made its crystal, it takes, which in free translation is: 'These products, made of glass, they are perfectly similar to natural crystals, but, the weirdest thing, not only did they not lower their prices, but, on the contrary, they raised her up”.

Let us pause for a moment at a few words of Pliny: „… perfectly similar to natural crystals”. This could have been written in the first century B.C.E., because the similarity between glass and crystal can only be apparent. This sentence can only be based on a superficial judgment, out of ignorance about it, what is crystal. We already know large-crystalline stones with regular structure clearly visible to the naked eye, and semi-crystalline stones, also made of crystals, although special instruments are required to view them. Almost everything, what surrounds us, are crystalline bodies. More precisely, almost all solids. One of the few exceptions among minerals is obsidian. In its chemical composition 66 do 77% is silicon oxide SiO2, thus, it is chemically indistinguishable from any other silicate, which are crystalline. We remember, that great amethyst crystals could only form under ideal conditions, long-term crystallization. During the formation of cryptocrystalline varieties of chalcedony, the crystallization was much faster, and its conditions are far from ideal. Obsidian is found only in volcanic areas, where it is formed from lava that is cooling rapidly on the ground. This is where the difference between crystalline bodies and obsidian lies.

All elements in crystalline bodies: ions, atoms or molecules have a well-defined place in the crystal. The crystal structure is an ordered structure not only externally, but also internally. When we melt rock crystal or amethyst, and then we will cool it down quickly, after solidification, we obtain a body similar in structure to obsidian – a body with an unordered arrangement of its components. We remember physics, that the higher the temperature, the faster the particles move, the greater the degree of their disorder. Cooling quickly is like freezing such a disordered state. Obsidian is an amorphous body. Its second name is volcanic glass. Glass imitations, which Pliny admired, they were made of molten and quickly cooled quartz sand, thus glass is also an amorphous body dissimilar to natural crystals. Nevertheless, from the time of ancient Egypt to the present day, we use glass imitations of gemstones and often delight in speaking like Pliny: "Similar to… real diamonds”.

The history of glass is also a history of cases, trial and error. Many historians of civilization believe, that glass was never invented, and the first melts happened quite by accident. Three ingredients are needed to obtain the glass: quartz sand, sodium compounds and calcium compounds. In some regions of our planet there are skats with just such a chemical composition. In the old days, they even had their own name: "Glass-making soil”. It was enough to light it on such "earth” the fire and the glass were created by themselves. So the first case.