Another group are decorative stones used in the manufacture of haberdashery and in construction, but often also in jewelery. They are minerals of lower hardness and durability, with colors other than precious stones, generally opaque. But also among them there are exceptionally beautiful items with very high prices. Opals are an example, whose purchase price in Poland does not exceed several hundred zlotys per kilogram. To be the most beautiful, so-called black opals, in fact tinted dark blue, dark green, multi-colored specimens found in Australia were paid for several hundred thousand dollars. Like the biggest diamonds, they were even given proper names: The dawn of Australia, Black Prince. Known, there are more than valued and sought-after various precious and decorative stones 200. At least that many of them were distinguished by giving them proper names.

The greatest number of names of varieties of precious and decorative stones can be distinguished in the quartz group. Minerologists divide them into two distinct subgroups. Chalcedony group, to which they belong: at you, chrysopraz, heliotrop, jaspis, carnelian, onyks, sardonyks i inne, and a group with no name of its own, most often referred to as the main name of the mineral – quartz. The latter group includes rock crystal and its colorful varieties - purple amethyst, yellow lemons, dark brown smoky quartz, black morion, white milk quartz, aventurine quartz, falcon eye, Tiger's Eye, quartz cat's eye and rose quartz, sapphire and emerald.

Of all the names mentioned above, the name rock crystal is the most familiar to every reader, or at least its first part – crystal word. Already a 7th grade student knows, that the term crystal is used to define all solids of an ordered order, proper construction, having the natural form of a polyhedron. All gemstones are crystals or bodies composed of many crystals. So why is this word used only in the name of the rock crystal??

Crystal is the Polonized Greek word for krystallos, which originally meant ice, and later also transparent, colorless quartz (Mountain crystal). In ancient times it was believed, that in the high mountains, e.g.. in the Alps, in which mountain crystals were found and mined, under the influence of severe frosts, the water froze forever. Such ice was forming, which does not melt even when heated. Much later, when in the 17th century the properties and structure of crystals were studied, the mountain crystal was, in a way, the model crystal studied by many crystallographers, hence the name crystal was extended to other bodies of regular shape, and to the former "krystallos” added mountain-word. 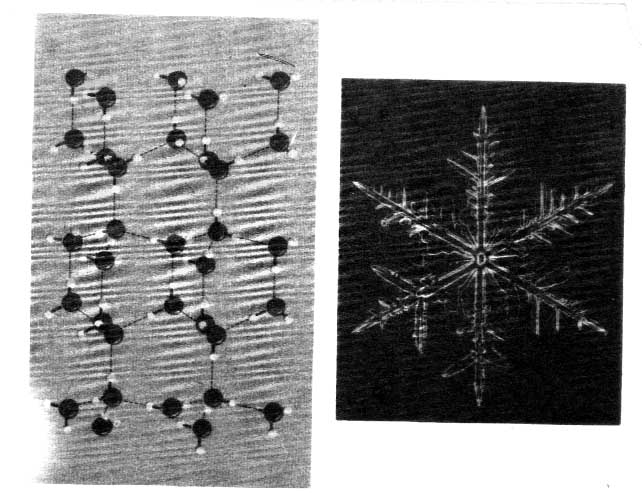 Man has come into contact with crystals at that time, when he was looking for flint to make tools or sheltered from cold nights in natural caverns and caves. Still the first man, we know about, that he was interested in their regular construction, was the German astronomer Johannes Kepler – same, who discovered the three main laws of planetary motion. W 1611 He published his dissertation “On hexagonal snow”, in which he announced the hypothesis, that snowflakes are ice crystals composed of densely arranged, frozen water molecules. The dissertation treated by Kepler as a joke, has become the basis for research on the symmetry of crystals and their geometry.

W 60 years later, the Danish physician and mineralogist Niels Stensen discovered, that the faces of the crystals of the same minerals always meet at the same angle, regardless of the external shape of the crystal (the law of constancy of angles).

One of the fundamental laws of crystallography was announced in the year 1784 by an outstanding mineralogist – creator of crystallography as a separate science, Francuza Rene Juste Hauy. On the basis of numerous studies, proved, that the crystals were not accidental. As a result of many tedious measurements, he developed the first theory of the internal structure of crystals, he specified, that each crystal is made of many polyhedron-shaped unit cells, the repetition of which in three directions allows the entire crystal to be recreated, and introduced the concept of spatial crystal lattices. Hauy also discovered two other fundamental crystallographic laws. Right, which he says, that each face of the crystal cuts off such segments on the three basic crystal axes, which when divided by themselves give integers – was called the law of rational segments, and the law of symmetry.