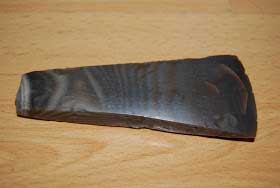 Peoples of the East, instead of flint, they used jade for their tools, hard, and at the same time very impact resistant, crushing and smashing. Today jade – two metal silicate: sodium and aluminum – it is a decorative stone, most often in various shades of green, sometimes yellow-green, orange, red, and even purple. Used for making ornaments, knives, utensils, toiletries and musical instruments. It is used to make gongs, bells and flutes supposedly giving out the most beautiful sounds with long vibrations. In pre-Columbian Central America, jade was valued on a par with gold. Unfortunately, after the Spanish conquest of America, most of the jade products were destroyed, and America's jade-processing culture has died away. For us, jade is a decorative stone, before the metal age, it was a highly valued and expensive material for "modern" technology.

A similar function, and until recently, served as jade-lime, iron and magnesium silicate, nowadays exploited as a decorative stone, mostly green with white spots and veins, with very high strength – 7 times greater than the strength of granite. Considerable strength and impact resistance, characteristic of jade and jade, results from their compactness, and at the same time of a fibrous structure. Their structure is similar to compact pressed cotton wool made of metal silicates, glued with the strongest glue. Manufactured composite plastics have a similar structure. Jade tools – siekierki, the heads of clubs and plows were also made in our lands from nephrite mined in Silesia in the vicinity of today's Dzierżoniów. Like jade, yes and jade, perfect material for tools, it was for decades more expensive than gold. Jade knives and hatchets were used by Papuans until recently. However, the price of these tools was so high, that not everyone could acquire them, and the jade tool was passed down through the generations from father to firstborn son.

Knowledge of our ancestors about rocks, also those used for making tools, it was very small. It was limited to the ability to recognize the mineral that is being sought, the ability to find it, extraction and processing. Fortunately our ancestors, almost all rocks and minerals have a characteristic color, which was the first clue and made it easier to find the material. An important feature was the hardness and strength of the material. Very hard flint was brittle at the same time. This made processing easier by splitting it with another piece of flint, but it limited the use and durability of the tool made. The jade was hard and impact-resistant, it showed no brittleness. This made processing difficult, raised the price of the tool, but the tool was becoming indestructible, could serve several generations. For the user of the tool, awareness was sufficient, that it is good. He was not interested in the answer to the question: why. Why a jade hatchet cuts even the toughest trees, and the flint may break. This was done much later by petrography – rock science (Greek petra = rock and graphein = to scrape, engrave, write-describe) and mineralogy - the science of minerals. It is thanks to these teachings that we know the fibrous structure of jade and jade, we know, why are they, just like glass, very hard, and at the same time they are not like brittle glass.