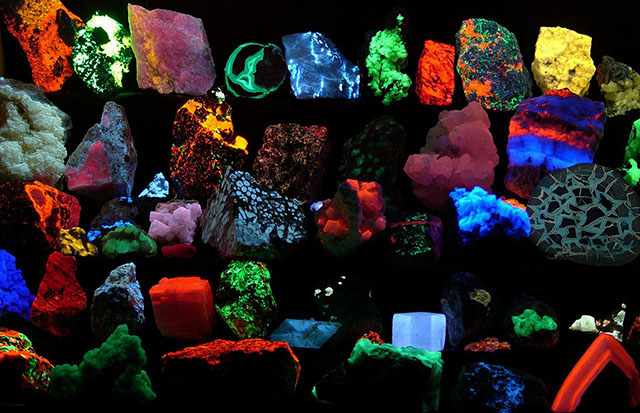 Depending on the duration of the glow, fluorescence and phosphorescence are distinguished.

Fluorescencja, which is named after fluorspar, where the phenomenon was first observed, is a kind of luminescence, lasting only for the duration of the illumination and fading away after its interruption. The fluorescence of green and blue colored fluorites is especially beautiful in white light, which fluoresce purple. Many minerals show a beautiful and distinct fluorescence when exposed to invisible ultraviolet light.

Phosphorescence is different from fluorescence, that the glow of the body (mineral) persists for some time after irradiation with excitation radiation.

Of particular importance for the study of gemstones is the induction of luminescence (fluorescence) by irradiation with ultraviolet light. In this way, it is sometimes possible to quickly identify the minerals under study, and also distinguish precious stones that are minerals (natural) from those obtained in laboratories, i.e.. synthetic stones. Various types of quartz lamps are used for this purpose, used in medicine and for cosmetic purposes.

Keep this in mind, that the human eye is sensitive to ultraviolet light, which - when looking at the radiation source without shielding for a long time (ordinary glass glasses are enough, which stop the radiation of the length 253 nm) - can cause eye inflammation, and an unpleasant skin burn, as with excessive sunbathing. Due care should also be taken when using x-ray equipment.

Such precious stones, like a ruby, red spinel, alexandrite and emerald, whose colors are due to the presence of Cr3 + chromium ions, they should give a distinct red fluorescence. In fact, this is how rubies behave, spinel i aleksandryt, while the emerald, when used with a long-wave lamp, usually shows a green glow (the reason for this has not yet been clarified). A green synthetic spinel mimicking green tourmaline, tinted with chromium impurities, produces a red glow using ultraviolet light of a longer wavelength, while with radiation of a shorter wavelength - blue-white glow, characteristic of most synthetic spinels.

X-rays can often be of help in distinguishing between natural and synthetic stones. When these rays are applied, synthetic white sapphires may show a red glow, and white spinels - green or blue glow. Likewise synthetic rubies, which are probably cleaner than natural ones and do not contain any iron, show the phenomenon of phosphorescence, which is not the case with natural rubies. However, this is not the case with recently made and improved synthetic red spinels.

X-rays have also found application in the study of pearls, when distinguishing between natural sea pearls and cultured sea pearls, and between sea and freshwater pearls.

Despite the positive results obtained more than sixty years ago (1920 r.) by H.. Michela and G. Riedl (using special equipment from the Viennese company G. L. Hertz) the method of inducing lumineseence with cathode rays was not widely used. Research B. W. Claira showed, that cathode radiation causes in synthetic sapphires - unlike natural sapphires - phosphorescence and a change of color to brown.