In recent years, physics has once again intervened in the production of imitation jewelry. Artificial, glass, colorless and transparent stones are provided with a layer… interference. We remember, that the interference is the effect of refracting and overlapping light waves in thin layers, e.g.. oil spilled on the water surface. These are the layers, more specifically, interference filters are applied to the bottom of the glass "stone” cut in the shape of a diamond in one of the glass jewelery factories in the USSR. The interference filter consists of several super-thin layers of metals superimposed on each other, e.g.. aluminum layer, on it a layer of zinc, one more aluminum and one chrome. As the light passes through the glass, it hits the filter, breaks down, it interferes and colors "precious” stone in red, green, blue or different depending on the thickness of the interference layer and the number of layers.

With modern production methods imitation jewelry it would often be difficult to distinguish between "stone” made of glass from real stone. Fortunately for us, physics helps us too. Glass feels much warmer to the touch than a real gemstone. When the stone is a crystal, feeling of cold caused by touching it, for example. to the forehead it takes longer, while the glass heats up very quickly. I think, that when asked why, each reader can answer for himself. It is, of course, about thermal conductivity. if not, he has one more physical attempt. It is easy to scratch the glass imitation with a file, or even a hardened needle. The hardness of glass is much lower than that of diamond and many other truly precious stones.

Another type of artificial stones, and sometimes almost real stones are called doublets or triplets. They are created by assembling a stone from two or three parts. Upper part, called a crown, it is a small gemstone, and the bottom one is tinted glass, which gives the entire mass of the stone the desired color. The more difficult to recognize triplets consist of upper and lower parts, e.g.. made of rock crystal and a thin plate of colored glass glued between them, which gives the appropriate color. The exception is doublets, in which the crown is made of opal, and the lower part z appropriately selected for a given opal, colored stone or mother-of-pearl. This improves the color of the opal, emphasizes its natural beauty, but opal remains opal, without pretending to be any other stone. 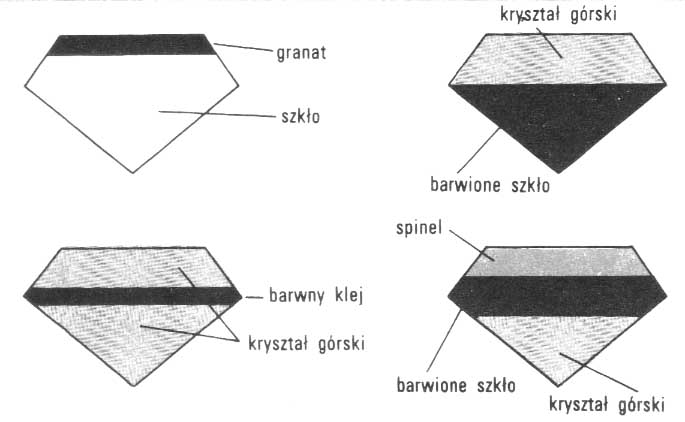 Well-made doublets, embedded in a metal frame, are difficult for the inexperienced eye to recognize. The simplest method is oil immersion. Different refractive index in glass and stone or in two identical parts and the binder layer leads to the visualization of the contact plane between the stone and glass or the stone and the adhesive layer.

So we have two groups of imitation gemstones. The stones are almost real, i.e.. stones, which pretend to be different, more sought-after gemstones or in their natural state, or after a color change. False stones, similar only externally to precious stones, made of glass, plastics or other materials completely different from the material of real gemstones. There is also a third group. Artificial stones, and yet true, that is, synthetic stones, made in a laboratory or at a gemstone factory.

We must treat this group of stones in a completely different way than the previous two. They do not imitate gemstones, but they are simply precious stones. A synthetic ruby ​​is the same as a natural ruby. Synthetic diamond, spinel, sapphire or garnet is a real diamond, spinel, sapphire and garnet. Often much better than natural stone, without numerous infixes, unnecessary impurities and defects of the internal structure. However, if we want to receive synthetic stones with inclusions, we can do it as well as nature. For the record, there are four differences. The synthesis of stones in the laboratory takes much less time than the crystallization process under natural conditions. Where nature took hundreds of years, we only need hours, and sometimes weeks. The second difference is the size of the stones. The largest natural ruby ​​has a mass 1184 karaty. But a ruby ​​considered large rarely weighs more than 10 carats. We are able to synthesize tens of thousands of carat rubies every day. The third difference is the colors. We are able to synthesize stones with colors identical to natural ones, but also stones with colors, which nature has never used. Our color palette for almost all gemstones is much richer. And the fourth difference. We can create stones, which nature has never created. Stones with completely new properties. Stones as hard as a diamond, and stones more beautiful than a diamond.