Fossilized wood is one example of a fossil, which made it easier for us to learn about the history of life on earth, and at the same time a perfect example, how precious and ornamental stones can crystallize from solution. Each, who at least once saw this variety of chalcedony in reality or in a photo, he would describe it as petrified or stone wood. Meanwhile, it is just pure chalcedony, sometimes jasper, and the least often opal without any organic ingredients, which has preserved the structure of the wood as a result of a very slow exchange of organic components. We emphasize-exchange, not change, replacing some elements with others. 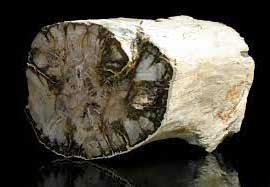 The condition for the formation of fossilized wood is that it is submerged in water containing significant amounts of dissolved silica. Water fills the cells, depositing silica in them, silica crystallizes and as if recreates the structure of destroyed wood. The process is very slow, jar by jar, and the color additives introduced together with the silica, preserving the structure of the wood, they can sometimes form pink rings, red, light brown, yellow, and even blue and purple. This process is called fossilization.

Crystallography, petrography, mineralogy, physics, chemistry, geologia i geochemia. As many as seven scientific disciplines dealing with minerals. It would seem, that we know, we should know everything already. We are interested in precious stones to say the least 5000 years. Minerals even longer. We have also been studying the earth for a long time. Geochemistry is a very young science, but it can already boast of very serious achievements. Meanwhile, we are constantly discovering new minerals. One of the great sensations was the discovery in the seventies, previously unknown mineral, which has been gracefully named charoite. The discovery was made by the marriage of Valentina and Yuri Rogowy, geologists, who hiked on an exploration expedition along the shores of the Chara River in Siberia (hence the name), one of the tributaries of Lena.

In a short time, charoite became a popular and sought after gemstone all over the world. This was due to the rarity of occurrence (so far, it has not been found anywhere except the original site of discovery), but also high hardness, striking bright colors, and even more interesting, an optical effect rarely found in minerals - the so-called. iridescence. The base color of charoite may vary. From brown, by the color of light lilac, up to highly saturated, sparkling purple. Irritation, from Greek- iris = rainbow, is the phenomenon of the formation of rainbow colors in very thin films. The iridescence effect is visible in the mother-of-pearl of some clams. It arises as a result of white light interference, but unlike the one already known to us, Irritation occurs as a result of the interference of light reflected from the boundaries of the adhesions of microcrystals, of which the charoite is made, or very fine gaps – cracks inside the stone. Charoit iridescent blue, which in combination with its basic color makes it the only one among many stones. It is a very complex mineral. It is composed of oxides of many metals: calcium, potassium, aluminum, new, strontium and sodium, but, as expected, until 56,5% is SiO2 silicon oxide, a compound of the two most common elements on earth.