FORMS OF OCCURRENCE OF MINERALS

Clusters of crystals adhered to a common base and arranged in parallel are called crystalline brushes. Beautifully shaped mineral crystals can be found in drusen, i.e.. in empty spaces in rocks, e.g.. in granites, in which crystals visible to the naked eye grow from the walls of the voids towards their interior. Due to their free growth, the crystals have natural walls, which are only missing where the druse adheres to the walls. The mineral composition of drusen may be limited to one type of mineral, e.g.. rock crystal, sometimes, however, they contain various minerals, not uncommon and precious stones, like tourmalines, topazy i akwamaryny. The size of the drusen varies. They can be small to very large, forming real crystal caves known e.g.. from the Alps, where they were intensively exploited, especially in the mid-nineteenth century. primarily for the production of quartz crystals. 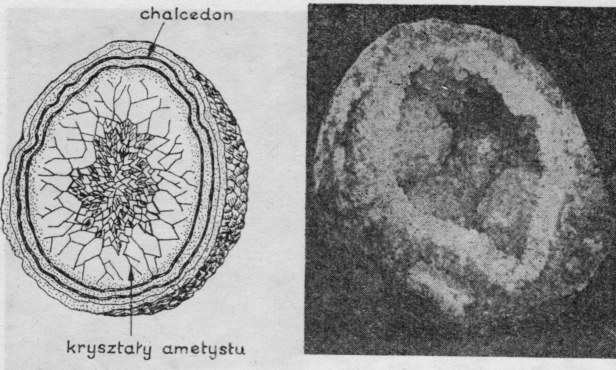 Geodes with shapes similar to spherical are similar to drusen, filling empty spaces in rocks. In the geodes, successive growth of mineral substances in the form of concentric layers can be observed. They usually have a cryptocrystalline structure. In general, the vacuum is fully charged, as in agate and other geodes known from volcanic rocks, more than once, however, especially at larger vacuum sizes, the center of the geode is filled with freely grown crystals directed towards the center of the druse. Little geodes, with a diameter not exceeding 1 cm, they are called almonds.