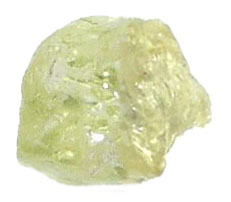 Two varieties of this mineral are used in jewelry. One of them - alexandrite - has a color change property that is unique among minerals, depending on the type of light: it has a different color in daylight, and another in an artificial one. The second variety is the so-called. cat's eye (cymofan), characterized by wavy glare. Name chryzoberyl comes from Greek chrysos - gold and beryllos — beryl, cymojan - from Greek kyma - fala i jaino - he shows.

Chemical properties. Chrysoberyl is beryllium oxide – of aluminum of formula Al2Leopard4; sometimes it contains admixtures of iron, titanium : chromium. The green color of alexandrite is due to the admixture of chromium. Chromium salt solutions show a color change similar to alexandrite (trivalent chromium), which are blue-green in daylight, and under artificial light they become reddish. The same phenomenon can be observed in vanadium salt solutions, which in the form of small impurities is found in synthetic corundum used to imitate chrysoberyl. Chrysoberyl does not melt in a blower flame. It does not dissolve in acids.

Character. Chrysoberyl crystallizes in the orthorhombic pattern. It often forms twin heart-shaped or pseudo-hexagonal crystals. This is the form of the Alexandrites from the Urals.

The color of chrysoberyl is greenish white, greenish yellow or emerald green, sometimes yellow or brown; it is rarely colorless. Chrysoberyl is transparent to translucent. The gloss is glassy, on the breakthrough fat.

Due to their extraordinary optical properties, noble varieties of chrysoberyl are very popular.

Aleksandryt It is characterized by strong pleochroism and is emerald green in color, reddish and orange-yellow. To color differences are visible even with the naked eye. A distinctive feature of alexandrite is this, that its green color changes to reddish under artificial light in daylight I. The best varieties are emerald green and ruby ​​red. This phenomenon is especially visible on larger specimens, in which the main cut plane is parallel to the longitudinal plane of the crystal.

In the past, alexandrites were mined only in the Urals from deposits on the Tokovaya River, east of Swierdłowska. Crystals, often in the form of triple twins, they reach greatness in them 4 cm. Currently, alexandrites are also mined in Brazil, in Ceylon and Madagascar. The deposits in Minas Gerais, Brazil, are found in pegmatic veins, intersecting gneisses and mica shales. Alexandrite occurs here together with quartz (rock crystal), topazem, tourmaline, spinelem i granatami. It is also extracted from secondary deposits. In Cejlonie (Morawak-Korale) and in Madagascar, alexandrites are mined from brittle alluvial rocks. Uralian alexandrites have a bluish tinge, while Ceylon are usually dark olive green.

Cat's eye (ang. Cat’s eye, not M, Cat's eye), that is, cymophan is an iridescent variety of greenish chrysoberyl with a silky sheen. Its name comes from its resemblance to a cat's eye. In a specimen of a cat's eye, cut in the form of a cabochon, the image of a streak of light shifts as the stone rotates. This phenomenon is related to the internal structure of the crystal, characterized by the presence of innumerable tiny tubules; on the surface 1 cm2 is often above them 20 000. Most often they are arranged parallel to the vertical axis of the crystal. Because the channels are empty, cause the phenomenon of opalescence.

In rare cases, and in some other stones, a similar phenomenon occurs.

Lemon yellow and light green varieties of chrysoberyl have been found in Brazil, colorless, transparent, occur in Burma (Strike) and on the Gold Coast in Africa.