In the group of almost real stones, one can be called "completely real."”. I'm talking about aquamarine, a stone the color of sea water. But the color may be different: yellowish green, green and highly valued – sea, greenish blue. One of the largest gemstones had a not particularly beautiful yellow-green color, that has ever been found and excavated - aquamarine weighing approx 100 kg. 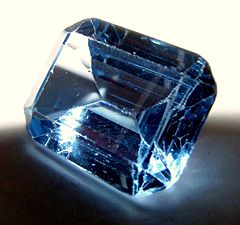 Most gemstones are crystals so small, that a special one was invented to determine their mass, smaller than the other unit. Karat, because that is the name of this unit, it's just 0,2 gram. The largest diamond found, "Cullinan” weighed 3106 carats, i.e.. little more than 600 grams. The largest ruby ​​found in Burma weighed 1184 karaty, but several carat rubies are considered large and very rarely found. The greatest emerald – the brother of aquamarine, he only weighed 2226 carats, a crystal of aquamarine, we are talking about, almost 100 kg, so almost half a million carats.

Found in Brazil in 1910 year, split and cut, he became the father of a whole family of jewels of total weight 200 thousand carats. Jewels in demand, because its color was also changed to sea-blue by heating. Until today, all "ugly” aquamarines are changed by this method to the most beautiful, truly marine. And what's interesting, The colors of the stones have been changed by heating for hundreds, maybe even thousands of years, and modern science, despite such a significant development of physics and chemistry, he cannot describe or explain the processes taking place at the same time.

Neither alchemists nor jewelers in antiquity could do it. Still, it was in antiquity, possibly by accidentally throwing a gem into a fire, the possibility of changing the colors of transparent crystals was discovered. But the discovery is not enough. The conditions must also be explored, in which this process works best – temperature and time of keeping the crystal in the fire, heating rate and cooling rate, and many others. How to do it, when we don't know, what is the phenomenon. There is only one way left – trials and experiments. Before getting the right results, you can destroy many precious crystals. But if it works… And almost always, when the experiment was successful, the dyeing method was kept as the greatest secret. Master, who has acquired knowledge,'He protected her jealously from others and only just before his death did he pass on to his eldest son or the best student. And if he didn't, if he died violently, premature death, the mystery died with him. Thus, a great deal of the knowledge of our ancestors was lost, knowledge, which we must acquire anew.

Our ancestors were able to color not only crystals. W 1928 In one of the tombs near Thebes, papyri, the so-called. Theban, kept today at the University Library of Leiden. All but one, which is located at the Royal Academy of Antiquities in Stockholm. In the latter, there are dozens of recipes and ways to forge decorative stones, mainly by dyeing stones of lesser value.

It was relatively easy to dye porous stones, like opal, agate or other stones from the chalcedony group, just like tabashir was stained- silica bamboo product. Agatha, widely used for the manufacture of decorative items and small haberdashery, were dyed in ancient Egypt, in ancient Rome and are dyed today. Wanted and much higher than other valued black agate (onyks) can be obtained from any colored, even at home. Just dip it in sugar syrup, and then treat with sulfuric acid vapors. The dye in this case is the carbon contained in the sugar. Of course, the element carbon, same, which is the basis for the formation of most chains of organic compounds, necessary for the existence of living organisms. According to the old ones, Roman recipes the same agate saturated with syrup and only heated, acquires a juicy brown color. According to modern recipes, agate saturated with syrup should be immersed in cobalt nitrate. The red color of the agate (sardonyks) is obtained by staining with iron oxide, and green by staining with divalent iron. Subjected to the action of other chemicals – acids or salts, may become lemon yellow in color, apple green, green grass, blue, azure (lapis lazuli imitation), as well as many other colors and shades. A solution of nickel nitrate and short-term heating give it a silvery shade.