The surest and most accurate way to identify and identify minerals, especially their internal structure, is the use of x-ray methods, i.e.. consisting in passing X-rays through the tested crystal. These rays were discovered by v 1895 r. W. Roentgen, which gave them the name X rays. In some countries, especially Anglo-Saxon, this name is still used today, in others it is called x-rays or x-rays. Invisible X-rays, just like optical radiation, that is, light, it is electromagnetic radiation. It differs from visible light by less 1000 times the wavelength, and therefore with greater insight, because it can pass through thick layers of bodies opaque to light. When passing through matter, X-rays are absorbed and scattered and cause various types of phenomena, e.g.. darkening of the photographic film, which is used to record the test results with these rays.

For the production of X-rays, constantly improved and technically perfect devices are used. Their essential components are the X-ray tube and the high voltage generator. X-rays are generated by the bombardment of the anode of the X-ray tube with electrons sent by the cathode. The cathode is an incandescent spiral that is the source of electrons. The anode is made of such metals, like tungsten, copper, cobalt, iron or chrome. Under the influence of bombardment with high velocity electron projectiles imparted to them by high voltage, the anode itself becomes a source of new radiation - x-rays.

W 1912 r. German physicist M.. Laue stated, that since the crystals have a network structure, and X-rays are electromagnetic waves of a length similar to the distance between atoms in the crystal lattice, when they pass through the crystal, these waves should be bent on the atoms of its lattice. The validity of this view was proved experimentally by Laue and his students. They passed a beam of x-rays through a crystal and obtained an image on a photographic plate placed outside it, called an X-ray image, testifying to the deflection of the beam of rays. This experiment confirmed the lattice structure of the crystal and the electromagnetic nature of the X-rays. X-raying the minerals allowed a direct study of their internal structure. 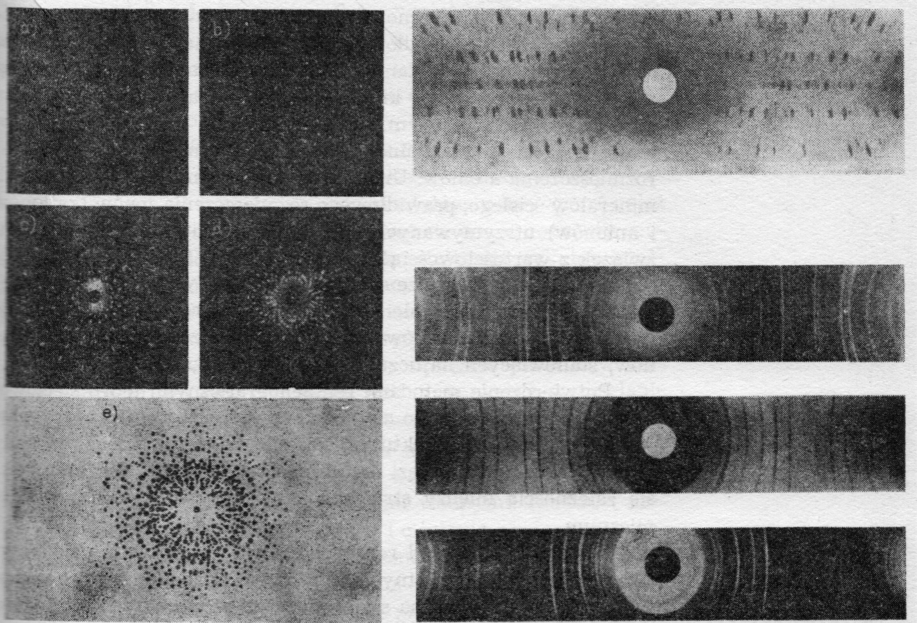 The center of the X-ray image is occupied by a stain originating from unbending rays. Smaller points are grouped around it, being traces of bending rays on atoms making up the lattice. The arrangement of these points is closely related to the symmetry of the overexposed crystal. This phenomenon occurs most clearly, when X-rays are transmitted in the direction of the axis of crystallographic symmetry - on the basis of the point system, its multiplicity can be recognized.

X-ray examinations of minerals can be performed by various methods. Depending on the method used, different X-ray images are obtained. Methods are among the most important: Lauego, rotating crystal and powder coating.

In the rotating crystal method, the test crystal is rotated around an axis perpendicular to the X-ray beam. On the obtained X-ray image, the blackening of the emulsion caused by the beams of diffracted rays is arranged along the layer. By making three X-ray images in three crystallographic directions, it is possible to determine the lattice constants a from the spacing between the contours., b, c.

Since the discovery of the possibility of using X-rays to study internal structure, crystallography has progressed enormously. X-ray examinations allowed to link the internal structure of the crystals with their physical properties and chemical composition. They also confirmed the earlier theories about the lattice and the types of spatial symmetry in the distribution of atoms. This made it possible to establish the exact mineral in many groups, the correct distribution of ions (cations and anions) held by electrostatic forces related to chemical valence. Thanks to this research, it was possible to establish more precise chemical formulas of many complex compounds, which in turn made it possible to carry out a rational classification of minerals. This is especially true for silicates, being the most abundant group of minerals.

Confirmation by X-ray methods of network theory; crystal construction has become the basis of modern X-ray analysis of their structure. Achievements in this field became the basis of a new branch of science - crystallochemistry - interesting; is the relationship between the structure of minerals and their chemical composition.

The use of X-ray methods allows the identification of gemstones, when other methods fail, and chemical analysis cannot be used for understandable reasons. These methods are used in particular to distinguish between natural and synthetic stones, which are more and more perfect and become a serious competitor to natural stones. The diamond can be easily distinguished by X-ray methods from various imitations, the number of which has been increasing recently (synthetic stones).