A characteristic feature of the crystals is the so-called. anizotropia, i.e.. dependence of crystal properties on the direction of incidence of light, the direction of the force, etc.. The anisotropy of crystals results, among others, from. pleochroizm, that is, multicolor. Such precious stones, like tourmaline or ruby, they may be lighter or darker in color, or simply a different color depending on the direction of the light. If you look at the ruby ​​crystal in the direction of its main axis, its color is darker than when you look perpendicularly. We observe a similar phenomenon in the crystals of many precious stones. In tourmaline, we observe the opposite phenomenon. Light incident towards its main axis is less absorbed, the stone gives the impression of a brighter color than with the light transmitted perpendicular to the main axis. In some cases, the light anisotropy is associated with the absorption of other parts of the light spectrum, which leads to the impression of a different color of the same stone, when we look towards the major axis (e.g.. green) and perpendicular to that direction (e.g.. yellow). Knowledge of this physical phenomenon must be taken into account by cutters, e.g.. ring eyelet or other gem. 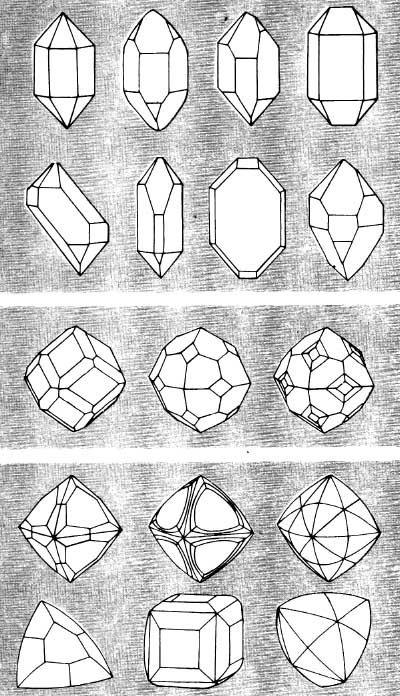 Various forms of crystals; from the top – quartz crystals, garnet and diamond.

The cleavage of the crystals is the most compelling evidence of the anisotropy of mechanical properties. It mainly depends on the type of lattice of a given crystal and on differences in the density of the arrangement of the elements that make up the crystal. Fragility is the ability of a crystal to break into pieces on impact, pressure or sudden changes in volume due to temperature change. The cleavage planes are usually planes, in which the elements that make up the crystal are most densely arranged. This is especially visible in layered crystals, like mica or graphite, which are easily separated in one plane, while subjected to the action of forces perpendicular to this plane, they offer a strong resistance, and then they suddenly burst with an irregular fracture surface. Cleavage is most easily observed in the calcite crystal. Even a slight force or a fall to the floor causes this crystal to crumble into smaller pieces, but also keeping the shape of the crystal. At home, you can observe cleavage on sugar or salt crystals, or on a simple piece of wood, which are easier to split by pressing the knife into the grain than in the direction perpendicular to the grain.

The cause of the colors in such quartz varieties, as amethyst, lemons, We already know rose or blue quartz. It results from contamination by chromophores, but the impurities are more or less evenly distributed throughout the colored part of the crystal. It does happen though, that the crystallization conditions will be disturbed during the crystal growth, that local impurities may appear inside the crystal, focused, very large in size. Crystallographers call such impurities infixes. They can be liquid infixes, e.g.. water, gas, e.g.. carbon dioxide, or infixes of other minerals (see photo on color insert).

These are the infixes that make the falcon look different, tiger's and cat's eye, even though all these stones belong to the quartz group. All these varieties are quartz crystals, inside which you can observe fiber-shaped infixes. The quartz cat's eye may be white, grey, pink, yellow, brown or green. Its characteristic feature, however, is not the color, but an optical phenomenon in the form of a narrow light streak imitating a similar streak in a cat's eye. This phenomenon results from the reflection and partial scattering of light from a fibrous inclusion, e.g.. asbestos. This effect is most evident, when the ground stone is convex, a spherical or ellipsoidal solid (the so-called. cabochon cut), especially when the cut is parallel to the grain direction. As the stone rotates, a streak of light moves across the surface of the gem. Similar effects can also be observed in other stones, and most beautifully in one of the varieties of chrysoberyl with its own name cymophan.

Falcon and tiger's eye are quartz with fibrous inclusions, but the quartz is opaque. Their clearly streaked coloration due to fibrous inclusions is due to selective light reflection – other wavelengths from pure quartz, and others from inclusions. Both varieties show a strong flickering after polishing and, similarly to the cat's eye, the shimmering movement, silky strand. Both contain fibrous crocidolite inclusions – a very complex chemical compound, mineral, which includes, among others. iron. The hawk eye is blue-gray to blue-green. The tiger's eye is formed from the falcon's eye as a result of the transformation of crocidolite infusions into quartz and the oxidation of the iron contained in it. It is this iron oxide that turns a tiger's eye yellowish, brunatno, sometimes with a golden shade.